It became somewhat of a running joke, but have a hard time remembering events in time. In my mind, everything happened 4 years ago – college graduation, moving in my current apartment, starting being a freelancer, releasing my first book, etc. This lead me to consider doing a monthly recap of what I’ve been working on and what will be coming up. Simple enough!

So August was the second month in a row I decided not to buy a transit pass and limit my travels to a strict minimum, in order to maximize the time I could put working on Hiver Nucléaire 3. This means working from home and not from the studio, which sounds amazing until cabin fever settles in. Some days have been great and productive but a lot were let’s say… sluggish. Thanks to a network of like-minded cartoonists and neighbours, I was able to take my pages with me and work at friend’s or at the Atomic Café in Hochelaga (a place that has fascinated me since it opened 10 years ago). Thank god this place and most of our apartments have a resemblance of AC because this summer has been brutal so far..

So while Hiver Nucléaire 3 is slowly but surely coming along, Hiver 2 got its own color revamp for the english version, set to be released in January 2019 by Boom! Studios. Reworking the colors or the second book proved to be much less of a hassle then what it was in the first volume. I see this process as a great way to learn from my mistakes. Hopefully, the third book will be the prettiest (nah, it WILL be the prettiest). I wish I could share the cover for Nuclear Winter 2 but we’ll have to wait the official press release! 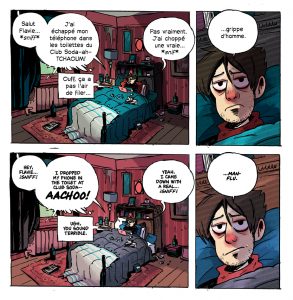 July also marked the end of production on l’Esprit du Camp, a 2 year colouring gig that ended up being much more than commission work. Michel and I worked our asses off on those 2 books and the fact that we haven’t killed each other during that time makes me consider further collaborations. Who knows!  I’ll talk about process and share a few progress shots after the launch of the book on September 6 at Planète BD. Mark your calendars!

Needless to say, it’s been an interesting summer so far. When it becomes too chaotic (I’m easily overwhelmed), I try to remember that I can’t plan everything and that in the end, being a freelancer comic artist inevitably means having to “herd cats” most of the time. And stay hydrated.

While I’m at it, here’s what’s been getting me excited over the last month.

Artist: Jorge Monlogo. He’s doing some interiors for the Over the Garden Wall comic and it just blew me away. Solid stuff.

Books: Haven’t read much this summer. If anything, just writing this down might be enough to kick my ass back into reading.